RIVERSIDE, Calif. — When Cheech Marin walks through his new Chicano art museum in Riverside, he looks at each painting as if it’s a long-lost friend.

What do you want to know

Marin stops, welcomes him with love and calls the painter by his name.

“Judithe Hernandez. He’s the one who got away,” Marin said of a large velvet painting of Cubist beauties that gets its own wall at the new Cheech Marin Center for Chicano Art and Culture. love this one.”

Hernandez is not a household name. In fact, few of The Cheech’s artists are well known, which is exactly the point.

“You can’t love or hate Chicano art unless you see it, so my goal is to get as many as possible to see it,” said Marin, who – with more than 700 pieces in his collection – is considered the greatest collector of Chicano art in the world.

Marin is best known as one half of comedy duo Cheech and Chong, but he’s spent the past 30 years cultivating an unrivaled collection of Chicano art. He recently donated 550 pieces from his collection to the center that now bears his name. Five years in the making, The Cheech opens on Saturday.

Located across from the Riverside Art Museum in a building that was once a library, the Cheech Center impresses as soon as visitors walk through the front door. A giant representation of the Inland Empire, rendered in a 26-foot-tall lenticular that moves depending on the angle from which it is viewed, gives way to a succession of galleries organized by theme.

The exhibit begins with a room of paintings that demonstrate a sense of community, such as the Arrest of the Peloteros painting by Frank Romero, “representing the time in Los Angeles when the city would clean up Echo Park and Silver Lake and get get rid of all the street vendors because there were no other issues like gangs, drugs and prostitution,” Marin deadpanned. 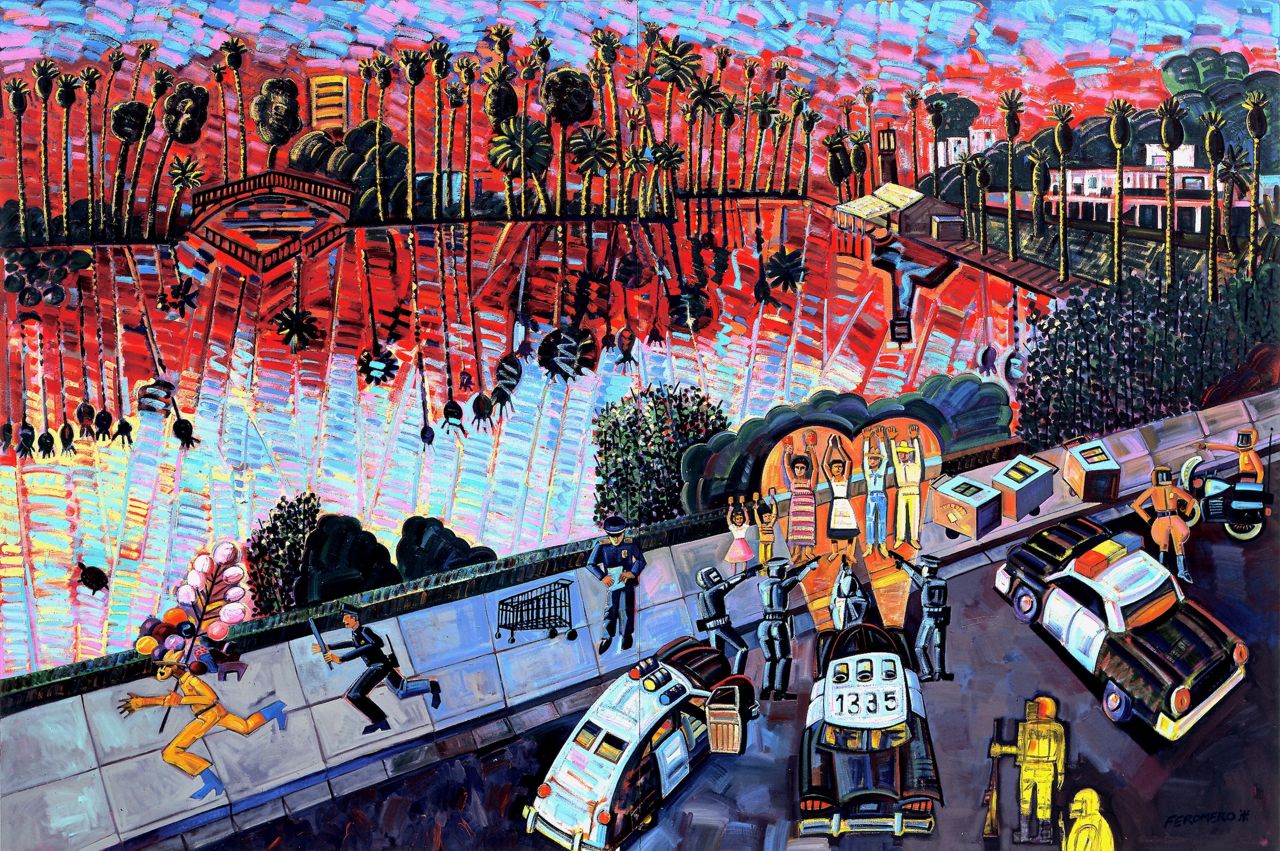 Romero was one of the earliest Chicano painters and part of a Los Angeles-based collective called Los Four, which helped bring national attention to the Chicano art movement. The other three members of the group – Carlos Almaraz, Beto de la Rocha and Gilbert Lujan – are also represented in the inaugural exhibition at The Cheech, which features 96 works by 34 artists from Marin’s collection. 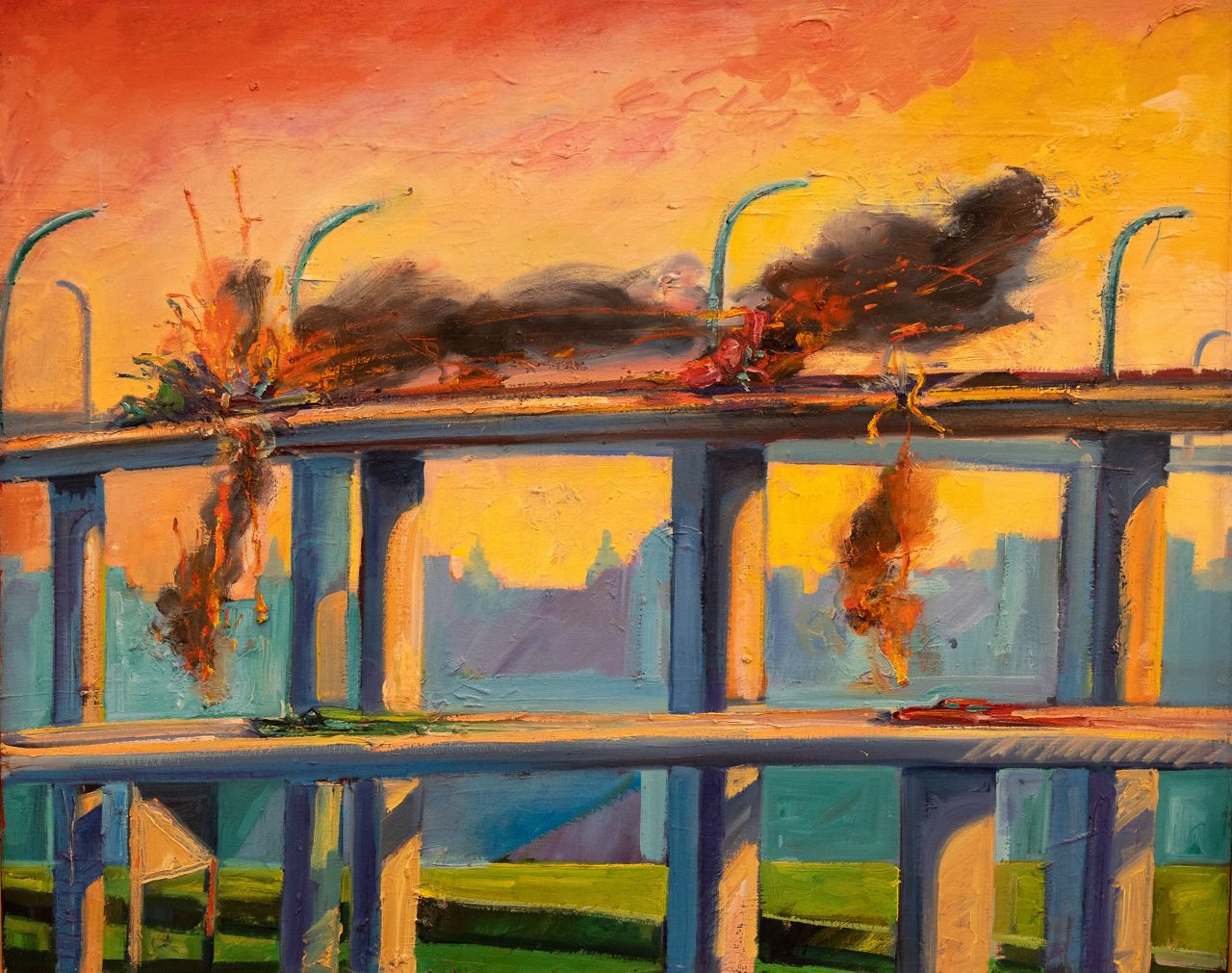 Marin’s interest in art began long before he started collecting when he was bored in church. Raised a Catholic in South Los Angeles, Marin attended mass every Sunday.

“It went on forever, and I was looking at the ceilings and seeing paintings up there,” he said. “There are guys in sheets, and they’re walking around in the clouds, and they’re having a barbecue with a guy in the corner. What? That’s what drew me to art. There were many sides that caught my imagination.

Now 76, Marin said he started learning the art because one of his cousins ​​asked him to study it and tell him what he discovered. This prompted him to visit the library and peruse art books, learning all he could about Picasso, Cézanne, Miro and other modern Western artists – at least in theory. It wasn’t until a school trip to LACMA that he got to see paintings up close. 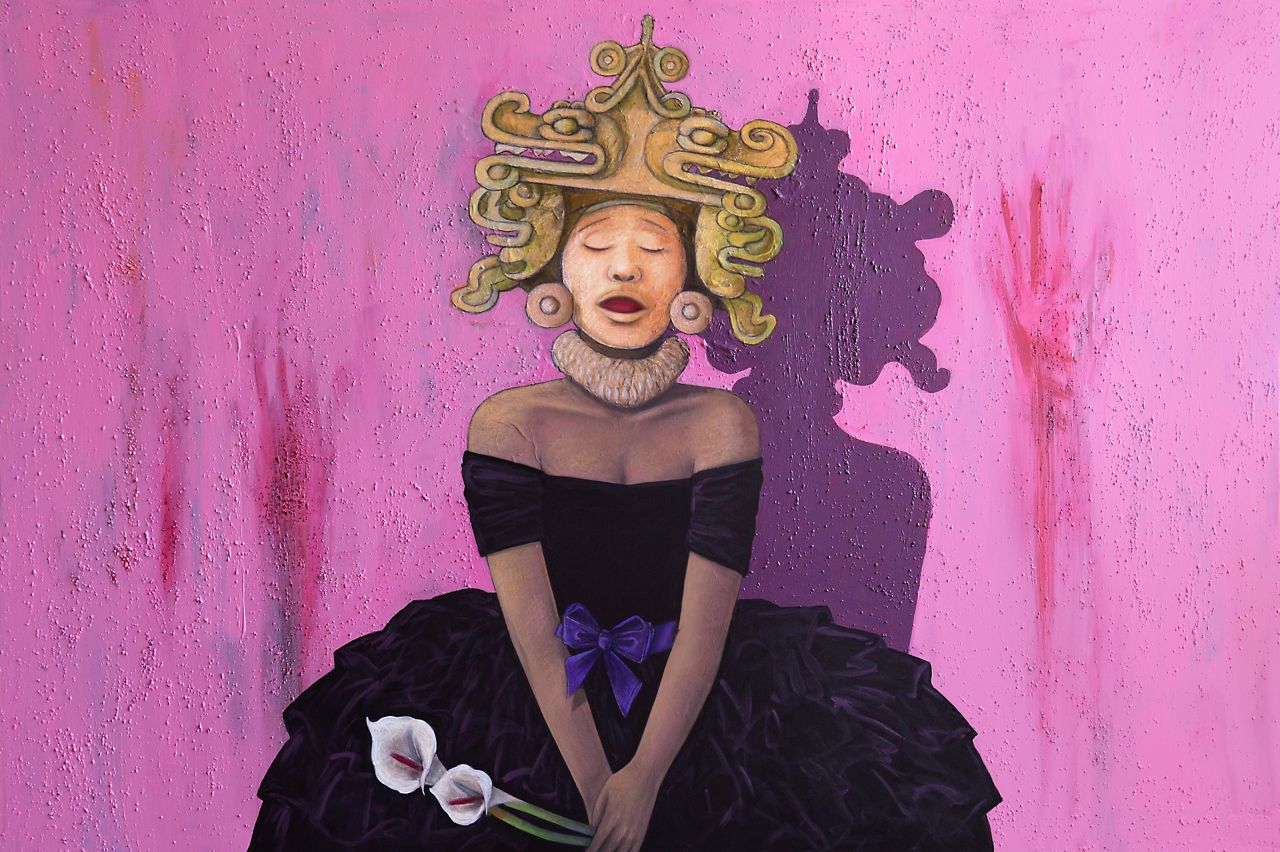 “Most of the kids weren’t interested, but I was. You have to see the paintings in person if you want to understand the whole story because of the painting medium,” Marin said. “I used to get up very close to see how they were done, and when the guard wasn’t looking, I would touch them.”

Marin only discovered Chicano art when his second wife, painter Patti Heid, began taking him to contemporary galleries in the 1980s. It was at the Robert Berman Gallery in Santa Monica that he discovered Chicano artists, such as photorealist John Valadez and Carlos Almaraz, best known for painting car accident scenes.

“I said, ‘These guys are good, man. It’s like hearing the Beatles for the first time. You know the Beatles, and you know what their stuff was built on: Chuck Berry and Elvis and Jerry Lee Lewis. But it was an English version of it. It was western art but a chicano version of it, so I recognized it right away. 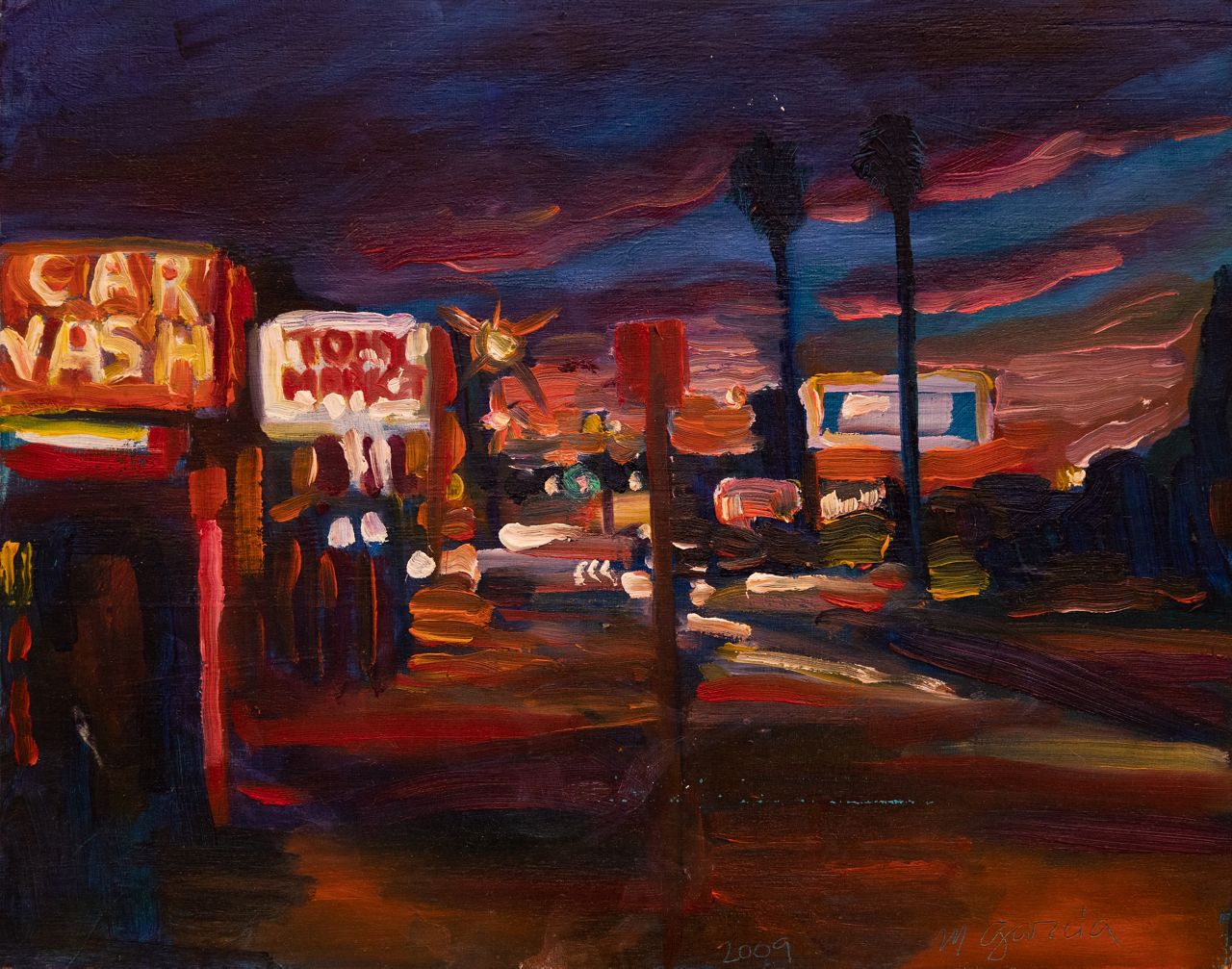 At the time, Marin had a string of blockbuster movies under his belt. The money he earned from “Up in Smoke”, “Nice Dreams” and other stoner classics put him in the right place at the right time to start collecting. Stints voicing characters in animated films like “The Lion King,” “Cars” and “Coco” kept him afloat with money, allowing him to continually add to his stable.

Marin has always been a collector.

“Whether it was marbles, baseball cards or stamps, I had an affinity for collecting it all and putting it in order,” he said.

This affinity is now exposed to the Cheech. What began with California-based ’70s pioneers like graffiti artist Chaz Bojorquez, feminist muralist Yreina Cervantez and political painter Magu has spread to works by Texas Chicano artists like portraitist Cesar Martinez, black painter Adan Hernandez and cityscape painter Jacinto Guevara – many of whom are included in the inaugural exhibition at The Cheech. 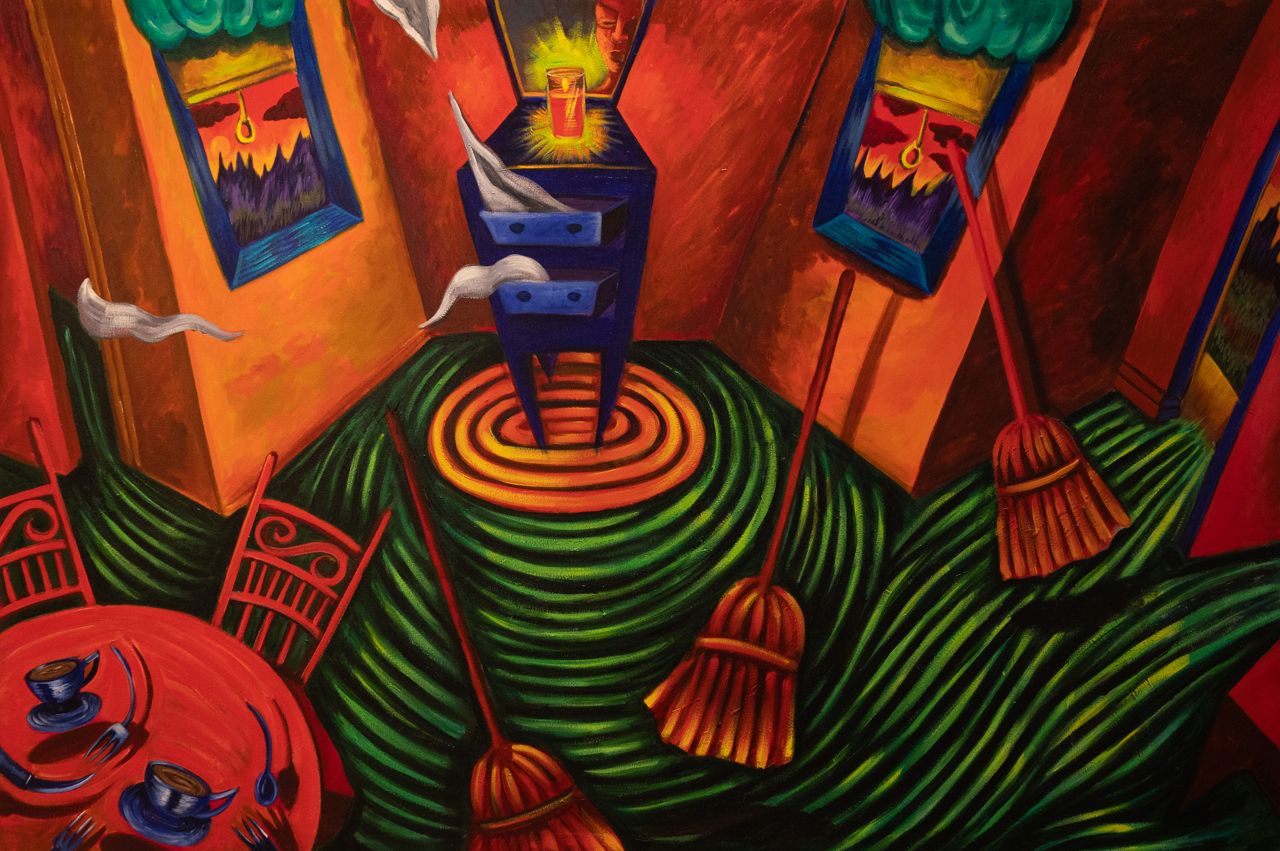 “This is the first deployment,” Marin said, adding that it will take the center at least five years to go through the hundreds of pieces he has donated to the museum.

Marin says he personally knows all of the artists he collects, and he doesn’t collect just one piece from them, but several. He buys a painting as it haunts him in his dreams, he says.

Marin decided to start a museum because friends from the art museum world insisted that he show his collection. For seven years, he visited part of it as part of the traveling exhibit “Chicano Vision: Painters on the Verge,” which featured 30 artists and traveled to 14 cities, including the Smithsonian in Washington, DC. 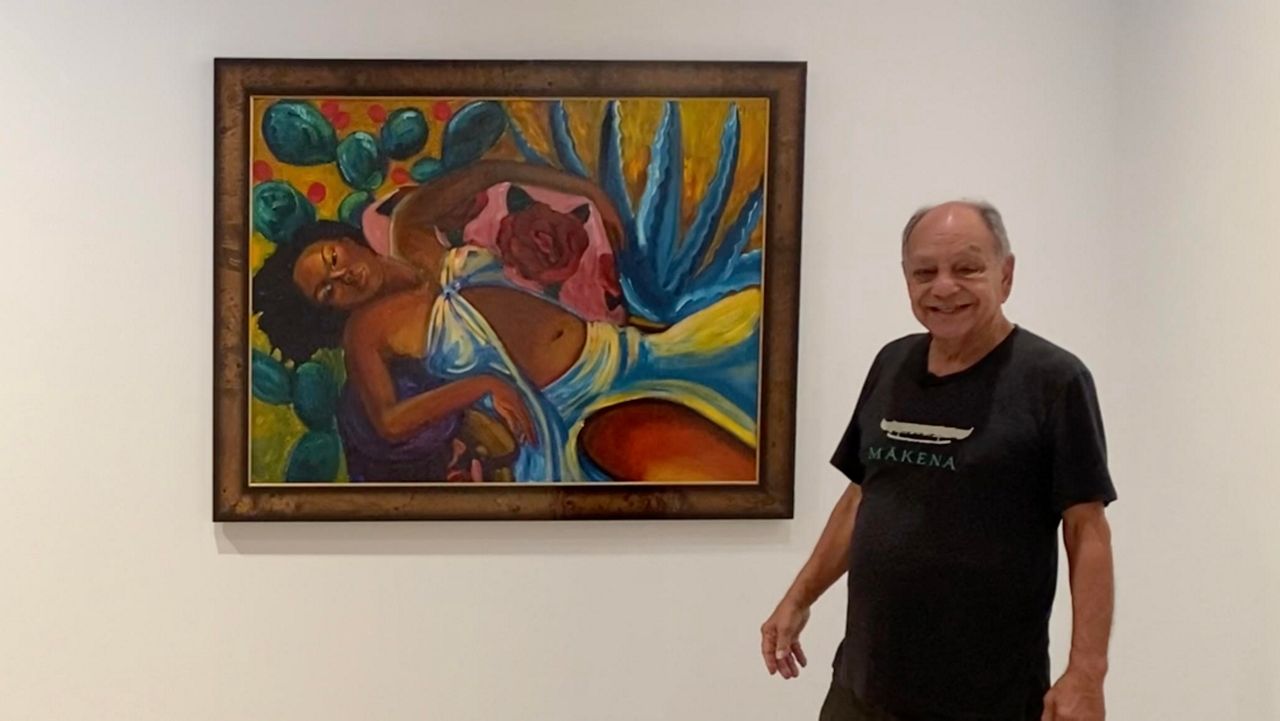 Validated by this tour, The Cheech is a permanent museum that expands the traveling show with dozens of other performers and a permanent home. Marin said the city of Riverside approached him after the Riverside Art Museum showed its collection of Chicano works on paper.

“I don’t think I had even been to Riverside before we did a show here, but I saw right away that it had all the foundations to build a really strong arts center,” he said. -he declares. “We can accomplish a lot here.”

The Cheech Center is intended to be a venue for Chicano painting, sculpture, and photography, although the focus will be on painting during the inaugural exhibit. Its 61,420 square feet of space is organized as an introduction to Marin’s collection.

“Our goal for the exhibition was to weave a narrative of Cheech as a collector and to begin to tell a story of the historical significance of the art in the collection and some of the works,” said Maria Esther Fernandez, artistic director of The Cheech.

To help visitors better understand Chicano art, The Cheech will support research in the collection.

“Our goal is to learn more about each work and the artists represented, but also to develop a thoughtful and comprehensive acquisition plan. We want to be a hub where we will have an exhibition pipeline for emerging, established and major artists,” Fernandez said.

Local artists from the Riverside area are among the emerging artists The Cheech intends to feature.

“You want to encourage local artists,” Marin said. “Not so long ago, all of these Chicano artists were local artists that needed to be promoted to be seen and recognized.”

Now, thanks to The Cheech, they are.